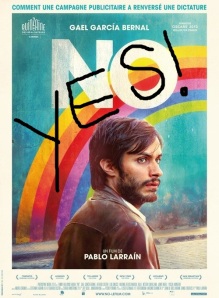 Gael Garcia Bernal gives the performance of his career in No, as an exiled Chilean working for the “No” Campaign in 1988. Basically, the plebiscite is coming up and Chileans will vote either “Yes” to retain dictator Augustus Pinochet or “No” and open the floor up for fresh candidates.

Bernal plays Rene Saavedra, whose father was exiled under Pinochet. Now his son is back in town and wants to turn Chile around. He helps run the campaign and its marketing efforts. Not unlike the Equal Time laws in the US, both the Yes Campaign and No Campaign are given 15 minutes each nightly to espouse their side.

The Yes Campaign utilizes nationalistic images and sweepingly patriotic music. On the other hand, the No Campaign starts off with heavy facts that serve as a scathing indictment of Pinochet’s regime. After marginal success, the No Campaign rethinks their strategy, and then the fun really begins.

This film is perfect for fans of the early 90’s documentary War Room, about the backroom goings-on of the Clinton campaign. Fans of Network will also enjoy the largely political dialogue.

As far as the way the film looks, do not be led astray by the DVD’s technicolor dreamcover. The film’s color has been muted and drained so that it actually looks like footage from 1988. In fact, since real footage is seamlessly interspersed with the dramatized footage, the viewer may not be able to tell which is which. Ubiquitous lens flares and unfiltered light add to the minimalism and uber-realism of No. While the color is too bled out to whisk the viewer into 1980s Chile, one may think that real found footage is being delivered to their eyes.

This is an important film culturally and historically, so I hope you will give it a chance.  Sometimes our battles aren’t won in fields or in trenches but in the streets and in strategy rooms. ‘No’ teaches us to choose the ballot, not the bullet.

Here is the actual video of the finished product of the No campaign. It’s catchy; I was singing it all afternoon.

Just say Yes to No. Recommended.