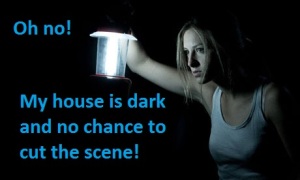 Silent House, the American remake of La casa muda, is now out on DVD, and despite my judgment, curiosity won out and we gave it a whirl. While there is more differentiation between the two sister films than between [REC] and its nearly identical twin and U.S. counterpart Quarantine, I don’t think the differences merit a singular watching of Silent House, sadly.

Without delving into spoiler territory, the biggest difference between the films is that the Uruguayan original posits more questions than it answers, while the American version answers many of the obvious questions, sometimes which slip into the realm of banality (e.g. why the windows are covered with plywood).

Both films taut themselves as being ‘one-take’ phenoms. I counted 5-6 cleverly hidden cuts in La casa muda and 8-12 in Silent House. The internet is rife with speculation on where the cuts happen, but the consensus is that neither film is presented in one take. If you listen to the DVD commentary on Silent House, the filmmakers are quite unapologetic for the multiple takes. They state that the integrity of the film was more important than the gimmick, which is certainly laudable.

Actually, the one-take gimmick harkens back to the master of horror, Alfred Hitchcock (as an aside, the format of this blog is based on Hitchcock’s film Vertigo). Hitch’s film Rope, based on the infamous Loeb/Leopold murders, was heavily marketed as one take, but most connoisseurs now agree the film is actually 10 takes glued together with rather glorious smudging. If Master Hitchcock couldn’t shoot a film in one take, will anyone ever achieve this feat?

I find gimmicky movies often fall flat on substance; too much attention is given to the format of the film. There are notable exceptions of course, and this is perhaps best evidenced by Memento. The reason why Memento is such a creepy film is that the unique structure and nonlinear story format adds to the story instead of guides it.

Too often these format-driven films add up little more to the tail wagging the dog. Conversations with Other Women was a fun watch, but did its format really add to the experience? The reverse chronological debacle 11:14 is only tolerable due to its format. A neat storytelling mechanic simply does not excuse the lack of a cogent, masterful story.

All in all, despite the ratings below, I would encourage you to see La casa muda to get a small taste of the burgeoning Uruguayan film market.  While not amazing, it hints at greatness to come. While Silent House fall flat, Elizabeth Olsen gives a powerhouse performance that is worthy of her already sterling oeuvre.  Whether her stellar performance is enough to entice you depends on your curiosity on the project.